The former Fenwick store in Leicester is to become a mixed-use scheme of leisure and retail creating much-needed city centre apartments and around 150 jobs. It was announced today Developer Aimrok Holdings has completed its purchase of the iconic store in Market Street in the city for a seven-figure sum and will be seeking planning approval for four retail units, a Champagne bar, restaurant and gym across the basement and ground floor.

Aimrok has plans for 90 high-end apartments for rent in the building’s upper floors. The new development is expected to create 150 jobs during the build and following its completion.

James Coningsby, head of commercial property at Nelsons Solicitors, acted for Aimrok. Funding for the deal was provided by the Leicester-based Cambridge & Counties Bank, whose team was led by its Business Development Manager Adam Jolley.

“The purchase of this iconic building in Leicester is really important to us. It has a great deal of history and our plans will create an exciting concept for Leicester and will secure the building’s future. By creating a mixed-use scheme, the building has a future which is sustainable for many years to come."

“The scheme will include high-end apartments for the private rental sector, as well as a Champagne bar, and retail units. We are working on scheme drawings now, ready for planning late summer.”

“Nelsons was pleased to work on this deal.  Fenwick of Leicester Ltd closed for the last time at the end of March and the purchase of the building by Aimrok was agreed last week.” 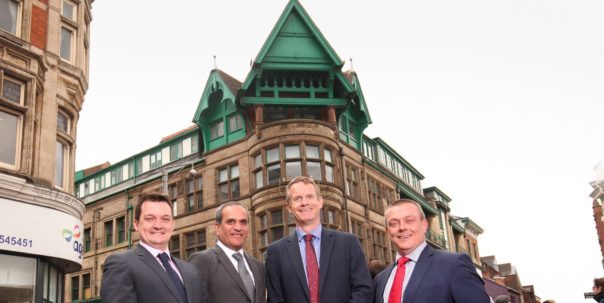 Aimrok has a proven track record in Leicester, having developed other schemes in the city the Bishop Street Post Office site where it created 74 student bed spaces and a major residential development in Hotel Street.

“As a Leicester-based bank, it’s great that we teamed up with several Leicester-based advisers to secure a bright future for a Leicester landmark. The new owners are highly experienced and their vision of developing this iconic city centre building will breathe new life into Market Street and attract further investment into this area of the city.”

“The new development will invigorate the Market Street area. The Aimrok plans will secure the building’s future, create employment during the building and after its completion.

“The new owner will be creating a significant development in an employment district. The gym will be an excellent addition for the Market Street area. This, coupled with a high-end bar and restaurant, will really appeal to office workers and fit well with the surroundings."

James Bradley of RG+P, the Leicester-based firm of architects, said:

“This is a very well-known building in Leicester. We intend maintaining the façade, while modernising parts of the building to increase its longevity. In order to ensure the building is sustainable and that it is around for another 100 years, we want to adapt it so it is suitable for a range of uses.”

“We have interest from several occupiers. We look forward to working with all stakeholders in creating a special mixed-use scheme to help to further regenerate the southern sector of the city centre feeding off the recent office lettings and commercial activity in New Walk and Welford Place.”